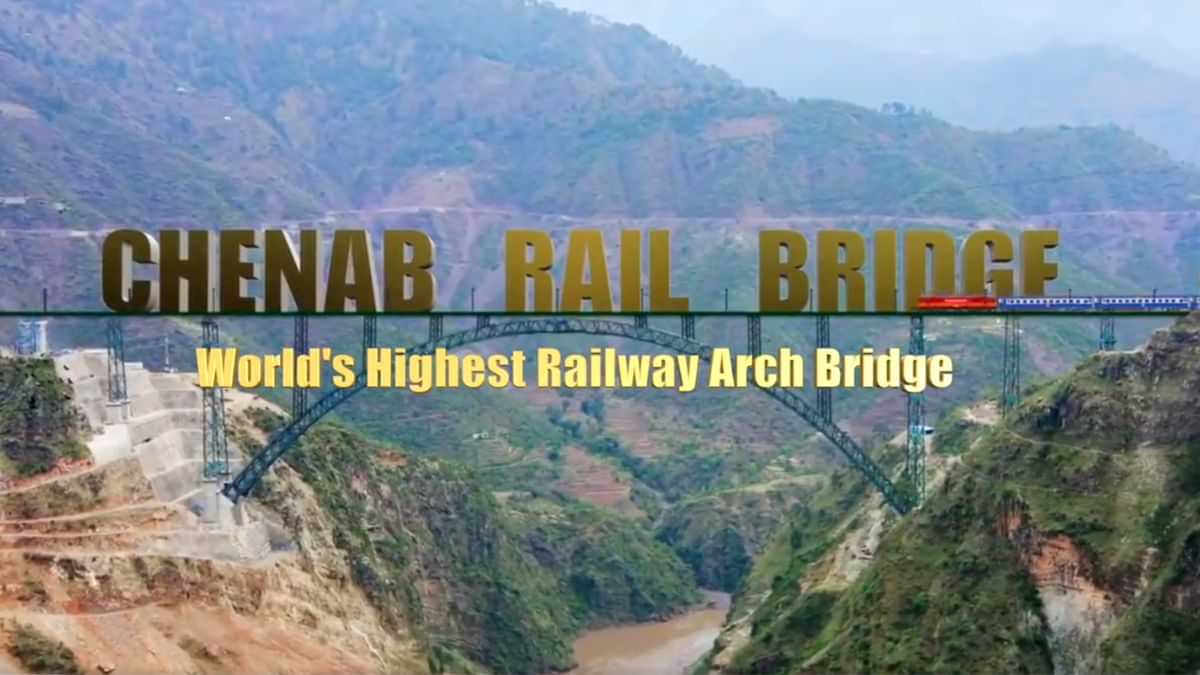 World’s Highest Railway Bridge – Chenab Bridge: Chenab Railway Bridge, which is being constructed as part of the Kashmir Railway project got its Golden Joint on 14th August 2022. On Saturday, the Indian Railways announced the inauguration of Chenab Bridge’s Golden Joint. The Golden Joint of a Bridge is the connecting two ends of the deck of the bridge. After completion of its construction phase, it will be the World’s Highest Railway Bridge connecting Katra to Banihal. Once constructed fully, the bridge will be 35 meters higher than the Eiffel Tower and will be a crucial link in the railway connectivity networkbeing developed in the Kashmir Valley.

The Highest Railway Bridge in the world is called the Chenab Railway Bridge which is 1,315 metres long. The bridge will be part of the crucial link in the 111-km stretch from Katra to Banihal which is being developed as part ofthe Udhampur-Srinagar-Baramulla section of the Kashmir Railway Project.

The bridge is part of the 272-km long railway line which is being developed from Udhampur to Baramulla. The railway project formally is known as the ‘Udhampur-Srinagar-Baramulla Rail Link Project’ and it will provide an all-weather highspeed connectivity option between Jammu with the Kashmir valley.

The construction of the Chenab Railway bridge started in 2004 but was put on hold in 2008-09 for inspection of safety aspects of the bridge. The frequent high-velocity winds that pass through this area may have posed a safety concern for the rail passengers and after ascertaining the same, the work was resumed again under the aegis of Afcons.

Jai hind!
India is daily reaching new heights in infrastructure development under the prime ministership of @narendramodi ji. One more major milestone achieved, the arch of the world highest Chenab bridge is completes. It’s one of the major projects of @RailMinIndia The USBRL pic.twitter.com/T6CUrCJFlp

Over 1300 workers and 300 engineers have been actively working on the Chenab Railway Bridge project and the work has neared 98% completion.

Once completed, the Chenab Railway Bridge will be the highest in the world at 359m above the river bed level. This unique distinction will also take the bridge to be 35 meters higher than the iconic Eiffel Tower in Paris.

The unique design of the World’s Highest Railway Bridge allows it to withstand high wind speeds up to 266 Km/Hour.

As per the figures shared by the Central Government, the total cost of construction for the Chenab Railway Bridge stands at ₹1,486 crores.